Wes Choc, a published author, is also a BridgeTEFL graduate who bucked tradition by teaching English abroad after retirement from a career in business. In this post, excerpted in part from Wes’ blog, weschoc.com, about his various adventures abroad, he describes his experience as a teacher of adult students in Quito, Ecuador.

After studying how to teach English as a foreign language (or TEFL, we pronounced it TEH-ful, as if it were a real word) using formal online instruction for five months, I earned an official (TEFLOnline.com) certificate by fall, then decided to explore how to use it. Looking at prospective countries, I focused on Spanish-speaking ones, first zeroing in on South America, then specifically on Ecuador. I arranged a month stint in Quito, followed by a second month in Guayaquil (at a school called Ordex) through a partnering program sponsored by GeoVisions.

After checking in to Ordex headquarters (in Quito), I received orientation with three other volunteers, but after meeting them, never saw them again. This particular TEFL teaching gig focused on conversational English used by those intending to work in the U.S. Of two main groups, there were those getting jobs at one of America’s amusement parks, like Disneyland or Six Flags, or older teenage girls becoming au pairs for well-to-do American families.

Preparing the students to pass the “embassy interview” was a crucial component of classroom activities. The embassy had a specific purpose to seek out reasons students really wanted to go to the U.S. in order to screen out those wanting only to join family living there, or to eliminate others without a sufficient reason to come back to their native country.

These half-day sessions were in the afternoon, and since my own regimen included professional no-cost Spanish language instruction from a bilingual instructor at “The School,” my day was filled strolling between job-oriented destinations. No doubt it was the best place in town to walk around. My School was set next to a brightly decorated coffee shop students and staff liked to use. Each morning I walked to [school] enjoying a cappuccino or latte as I people-watched from atop a coffee shop deck overlooking this oft-used avenue of garish-colored storefronts. 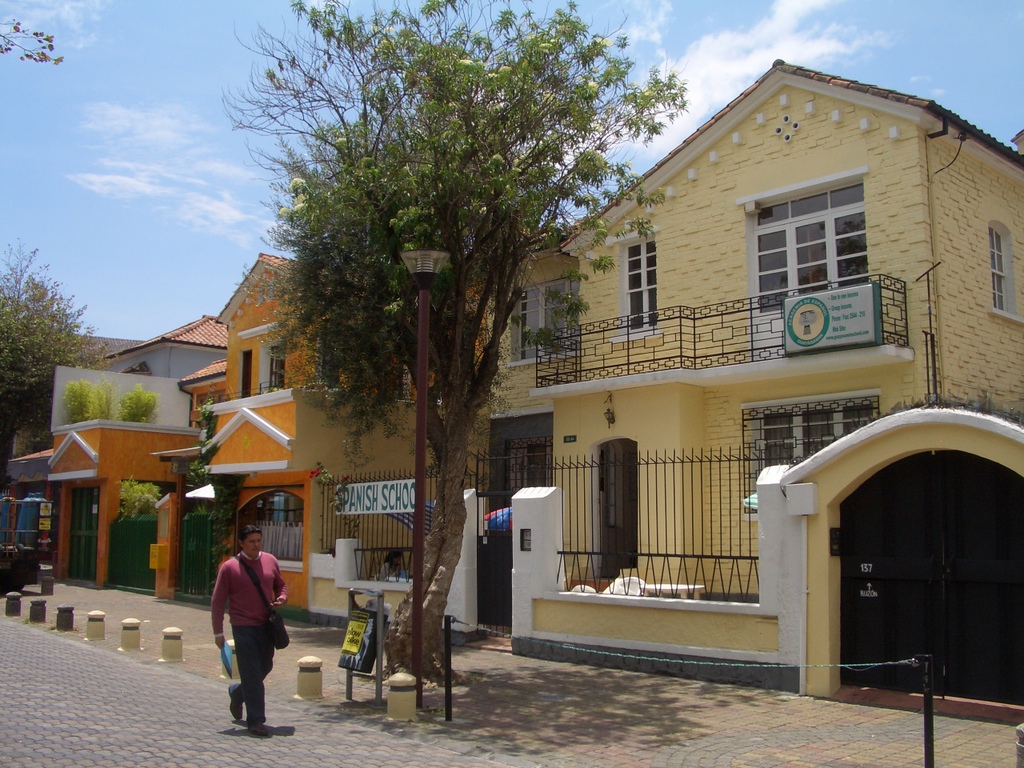 In Spanish class, I easily gained more understanding of Spanish from personal one-on-one Spanish conversation sessions than in any other forum before or since. There were numerous other Spanish language schools around, and I observed quite a few college-age men and women attending these.

Having free time, I hung out in the newer town center in Quito called Gringolandia (the name is a take-off from a Mexican word gringo, but I couldn’t ever discover how this word migrated into Ecuador or this neighborhood). The community catered to non-Ecuadorians, not necessarily Americans, as the name might imply. It was obviously a safe and police-patrolled area even though I was admonished not to linger anywhere late at night or in “wrong” or “other” areas of town.

During the day it was always OK here. English speakers from the U.S., Britain, and Canada represented perhaps one in five of those sauntering around … European students, local businesspeople and Ecuadorian students alongside hip locals making up all the rest. I often used local internet cafes to send emails or to play GameKnot “tournament chess” games online, but I could play casual chess on the street as well. The internet lounges were used heavily by locals and tourists alike at usually a dollar or less per hour. They served carbonated beverages and coffee, and were social conclaves for many.

Quito was certainly a pleasant, well-tailored and comfortable high-altitude city, conservative in cultural demeanor and active with perpetual hustle and bustle. An enriching busy-ness prevailed throughout the city whether you were just sipping your espresso watching people or trying to eat and eke out a minimum living inside this intricate environment.

Can you see yourself as a non-traditional TEFL teacher, too? Learn more about teaching abroad in South America, or worldwide, by visiting our TEFL resources page.