How to Teach Participial Adjectives to ESL Students

Let’s get cracking, then! Participles are words that originate from a verb but are used in different ways.

This should give you an overall idea of what we’re talking about when we refer to participial adjectives. If you’re taking the Bridge 120-Hour Master Certificate course, it includes a 40-Hour Grammar Advisor course that’ll train you in more depth on the topic.

How do you identify a participle?

So, when you ask your students to find the participle in a sentence, you could pre-teach a chart of possible endings that they can reference. You can also ask your students to give an example of a word for each ending, allowing for more student involvement in the grammar lesson.

What are some examples of a participle?

Some participles that you can teach in groups with your students could be:

However, sooner or later your students also have to learn all of the irregular forms, such as awoke, brought, clung, came, begun, and so on, that cannot quite fit into these groups. The list of irregular participles is quite vast, which can be discouraging for your students at times.

It’s a good idea to correct their errors with irregular forms – and really, all forms — with lots of positive reinforcement. E.g., “Your thinking is perfectly right; it should be like you said, but in this case, it’s irregular so…”

If you need some more tips on ESL teaching methods, such as how to correct your students’ mistakes, check out the Bridge Micro-credential course on Error Correction in the EFL Classroom.

How do you use participles?

1. Participles can be used with the auxiliary verbs “be” and “have” to make progressive and perfect verb forms.

2. Participles can be used to make the progressive and perfect verb forms in the passive voice.

3. Participles can be used as adverbs.

4. Participles can be used as clause-like structures.

5. Participles can be used as adjectives.

How are participles used as adjectives?

So, what is a participial adjective exactly?

It is a participle, as introduced throughout this article up to now, that functions as an adjective, modifying a noun or pronoun.

When you use a present or past participle as an adjective, it’s also called a participial adjective.

What are some common examples of participial adjectives?

Let’s look at some examples for better understanding.

When we talk about feelings, we can do so in two different ways: either by using a verb (e.g., annoy) or by using the -ed or -ing adjective (e.g., annoyed, annoying).

We often choose to use the adjective forms instead of the verb forms for the following verbs: 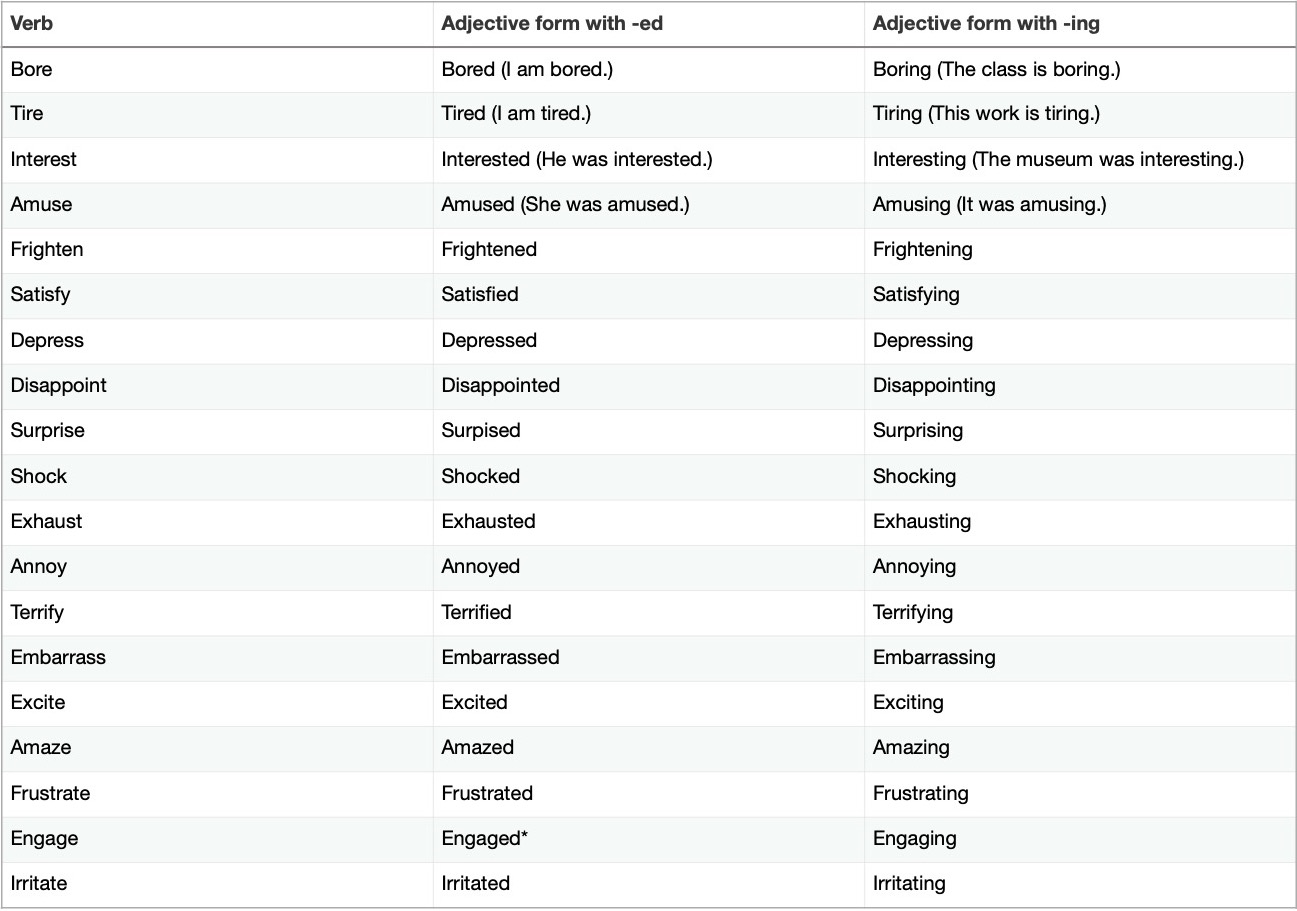 *Note: Engaged has a different meaning from engaging.

How do you teach participial adjectives?

Here are some useful tips for teaching participial adjectives to ESL learners:

As you can see, teaching participial adjectives to ESL learners doesn’t have to be intimidating, nor does it have to be boring for your students. By breaking up grammar topics like this one into small lessons and accepting all of the exceptions to the rules as a necessary evil, both you and your students can have a satisfying and successful lesson together!

Take the Specialized Certificate in Teaching English Grammar course to learn the best practices for teaching morphemes, parts of speech, tenses, and many other grammar subjects.

After backpacking Australia on a Working Holiday visa, Bridge graduate Johanna traveled to Japan for a year to teach English. She then moved to New Zealand for another two years before returning to her chosen home country, Japan, where she currently lives. Now, with more than eight years of professional English teaching experience, Johanna enjoys her expat life in Japan teaching teenagers at a private junior and senior high school, where she recently received tenure after only two years. When she’s not teaching, Johanna continues to travel regionally and explore new places.