What Is TPR for Teaching English and How Can I Use It?

Have you heard of a teaching technique called Total Physical Response – better known as TPR? The TPR technique is applied by ESL teachers around the world, both in the actual and the virtual classroom. Let’s take a closer look at using TPR for teaching English to find out what exactly it is, why it’s so important for our teaching, and how and when you should use it.

What is TPR in teaching English?

The principles of TPR, or Total Physical Response, are based on the way that children learn their first language.

When you learn your native language as a child, you don’t just listen to the words. You watch your parents for clues to find out what their words mean. When you start to understand the language, you don’t respond with your own words right away. You usually respond with actions first, until you know the correct words.

An example of this is when a mother asks her young child to get her favorite toy. The child won’t respond “OK Mom, I’ll get it!” and then take off. At first, the child will respond with an action. In this case, the child will go and get the toy. This carries on for many months until the child begins to speak. During this time, the child cannot speak yet, but she is taking all the language in. Eventually, when the child has figured out the language, she can start to reproduce it. TPR aims to mimic this effect in the classroom.

TPR is a dynamic approach in which students are encouraged by the teacher to use physical responses, such as miming the meaning of a word, in addition to spoken responses. By acting out language, it is thought that students interpret meaning through different parts of the brain, pairing physical and intellectual analysis.

What age group is TPR best suited for?

TPR has become a very popular technique, especially with children. In the classroom with young learners, using this method could be as simple as pairing commands such as “touch your nose” or “show me five fingers,” with the action of doing so yourself. Children can also easily sing along with the teacher to a song that integrates movement with language. Children are naturally curious and enthusiastic about new things, which makes them less shy or hesitant to express themselves using their entire bodies. 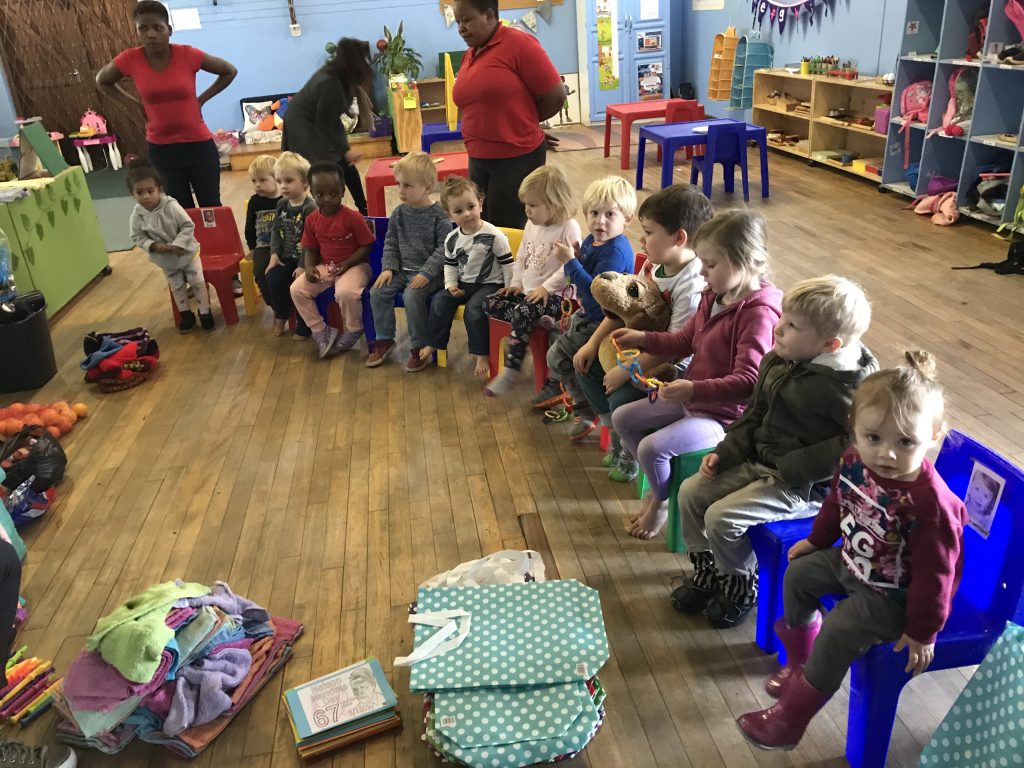 Does TPR work with adults?

It certainly can, though as you might suspect, adult learners are not always as enthusiastic about activities that involve TPR as young learners. However, it is possible to use this method in certain situations with adults, such as a simple activity used to teach imperatives in which phrases such as “sit down,” “stand up” and “pick up your pencil” can be performed to connect the grammar with physical movement.

Learn other techniques and activities you can use in the classroom in this Bridge eBook: Teaching English to Adults.

When should I use TPR?

You can use TPR to teach specific verbs, as mentioned in the example of imperatives with adults or, with kids, you can pick a fun song with lots of movement verbs in it and use it as a warm-up activity. Songs like the “Cha Cha Slide” or the “Superman” song are great for teaching young learners.

You can also use TPR to teach nouns. As you can imagine, the technique works very well for nouns that have an obvious action, like headache. Other words that could easily be paired with actions might include toothache, banana, football, and swimming; these nouns can be taught in the same way that you would teach verbs. TPR doesn’t work so well for more static nouns like table. 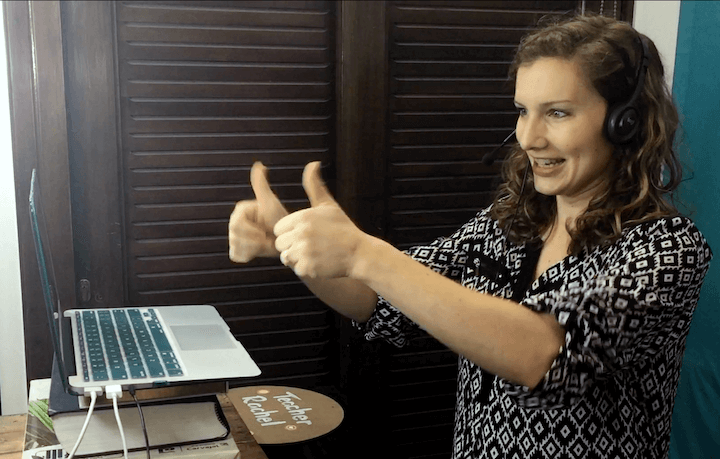 The TPR method for ESL also works great with stories. Even if children don’t understand the words right away, they will understand the actions, which helps with their comprehension of the story. For instance, if the character in the story wakes up in the morning, the students can mime the verb waking up (i.e., stretching, yawning, and opening their eyes) while saying it. If the character drinks juice at breakfast, students can mime putting a cup to their mouth while saying the verb drink.

It also makes the story more interesting and it allows the students to participate as they do the actions of the story. Furthermore, it can change up the interactions and energy levels of the classroom. Once you have told the story, you can get the students to re-enact it using the TPR gestures that they learned. This is a fun way to go over the vocabulary once more as a form of drilling. 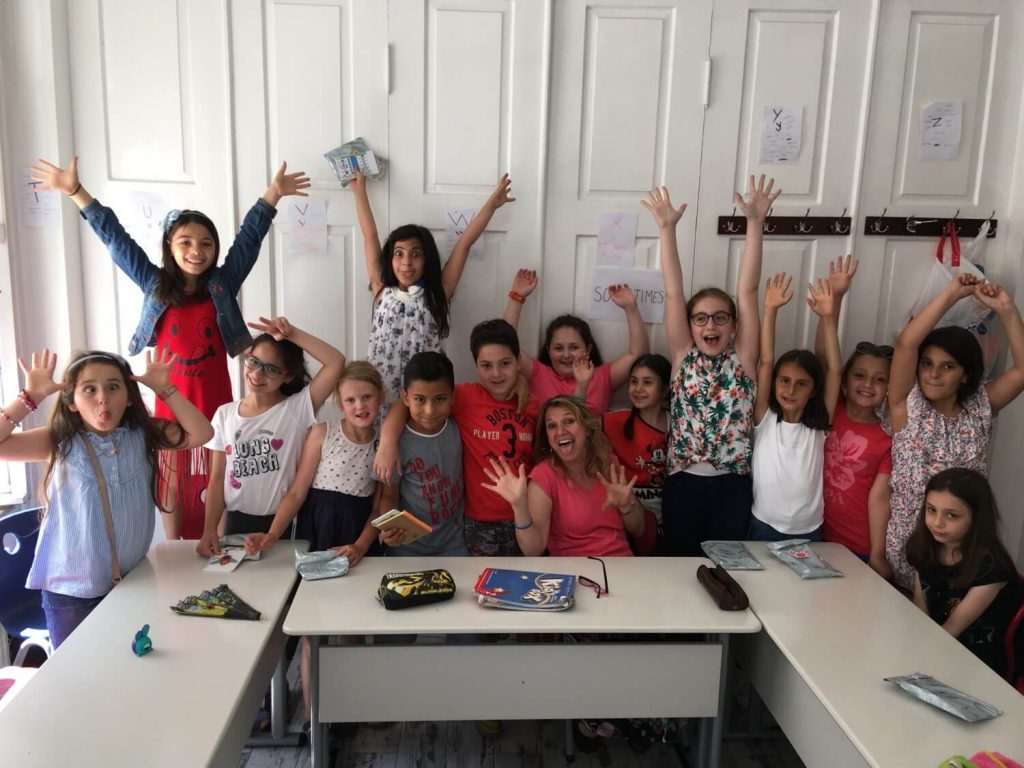 When should I not use TPR?

Although TPR is an effective method to use, especially with children, it does have some disadvantages.

Students who are not used to it can find it a bit embarrassing and could be reluctant to participate at first, so it may not work with every class. However, you can often get through this by throwing yourself into TPR 100%, modeling the movement, and letting your energy be infectious.

Why is TPR so important for teaching, especially online?

Children are motivated by activities they find immediately rewarding and exciting. TPR can turn a dull vocabulary word list into a fun and engaging activity.

You can also use it to change the pace and raise your students’ energy levels. Children are usually more engaged when they are being active. Getting students up and moving is much better than having your class of kids sit while you read a word list at them, or your online student stuck planted in front of the monitor for a long time. Encouraging your students to stand up and move around at certain designated times that you planned helps avoid an uncontrolled outburst of energy later on (which is especially hard to deal with when you’re teaching English online).

What other advantages are there to using TPR in my English lessons?

TPR helps your English students better remember the words and phrases they’re learning. Linking language with actions drives it deep into our memory. It’s much harder to forget something that we have drilled physically. Think about when you learned to ride a bike. Have you ever forgotten how to ride since? Similarly, for ESL, TPR aids with long-term retention like no other technique for young learners.

Although the traditional theory of learning styles has largely been debunked, some children do learn best when they are moving rather than by watching, listening, or writing. Adding TPR to your class means you are providing the correct learning stimulus to maximize learning for these children. 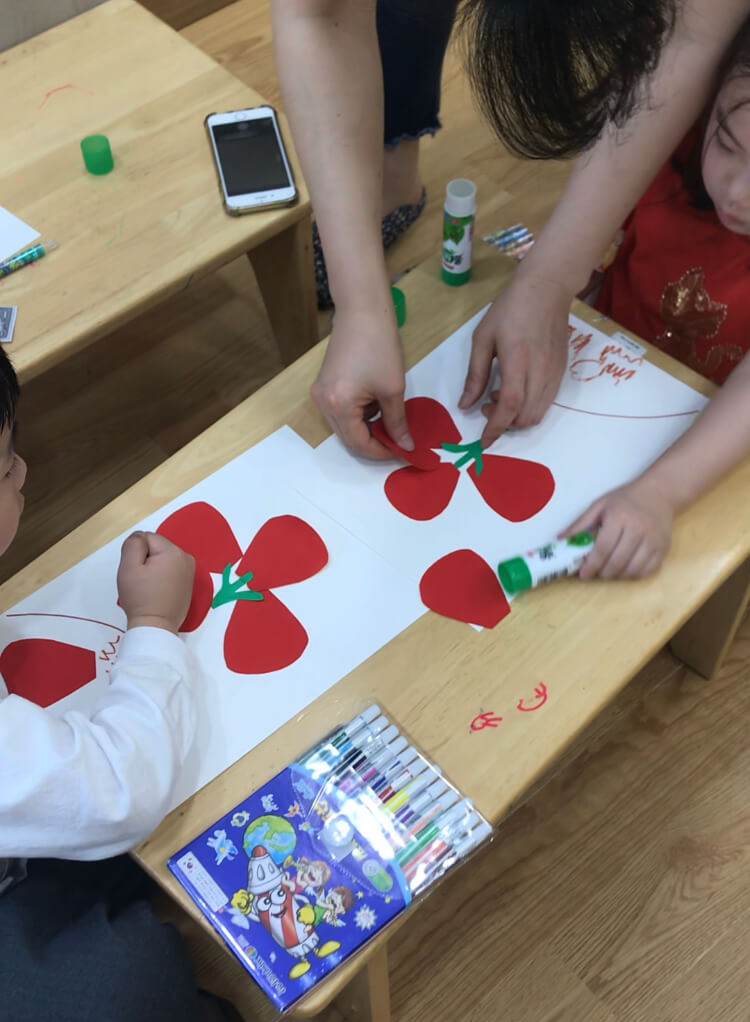 Even if some of your students don’t understand the words, they will have fun with the actions. If you have to drill vocabulary a number of times, for example, the children who already understand it can still have fun doing the actions while you drill for the other students.

TPR requires little or no preparation

TPR requires no materials and almost no preparation – other than a lesson plan that incorporates the technique. The benefit of this to you, the teacher, speaks for itself!

The fact that TPR requires no preparation also makes it useful as a buffer activity. If you find that your class is ahead of schedule by five minutes, you can do a five-minute TPR drilling activity or song. 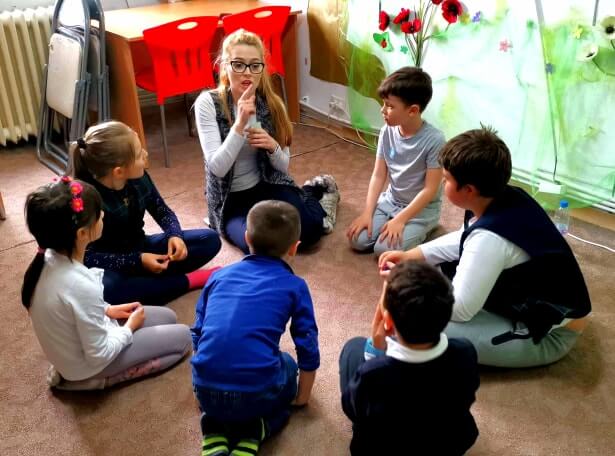 How is TPR used in the virtual vs. actual classroom? What are some TPR activities?

Regardless of whether you’re using TPR in the virtual or actual classroom, the technique mimics the way young children learn their first language from their parents, so you as the teacher must take on the role of the parent. In very simple terms, this means that you do the following:

So far, the rules apply to both the actual classroom as well as the online classroom. From here, you need to adjust your methods a little. 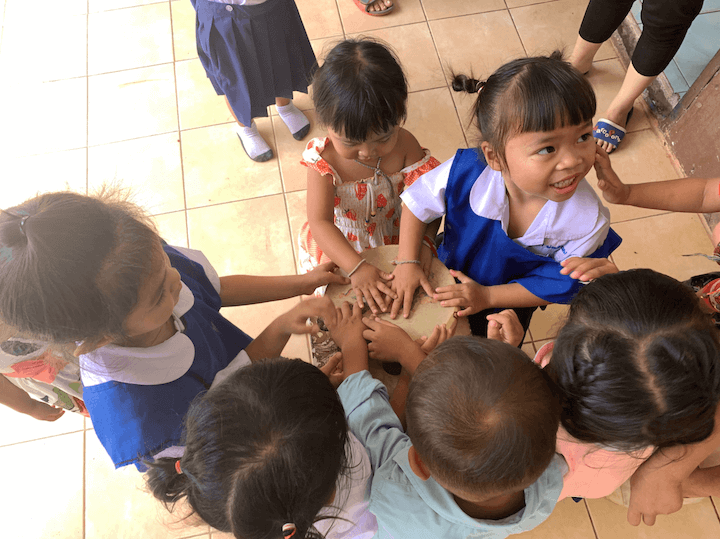 TPR works best when used as part of a “circle time” activity, in which students are seated in a circle and therefore have a good view of the teacher. Start by demonstrating the word, then introduce the action, then get the students to say the word as they do the action.

Another way is to introduce a whole song with a dance routine that represents different words of the song that you want your students to learn. You’d be surprised how fast young children can pick up movements and vocabulary when their bodies and minds are equally involved in the learning process!

TPR can also be effectively adapted to the virtual classroom.

When you’re teaching a one-on-one online English lesson and your student is getting used to the new word, you can encourage him or her to say and do the action and you will follow. This switching of the teacher-student role can be very motivating for children because they can feel that they are in charge, as opposed to being told what to do by adults most of the time.

When you are teaching a group of young students and you are using a counting song, for example, your students could use their fingers to show the proper number to accompany the lyrics. The repetition of songs is also helpful for them. The computer can work well with this method because the students focus their attention on watching your gestures on the screen, or presenting their own when it’s their turn. 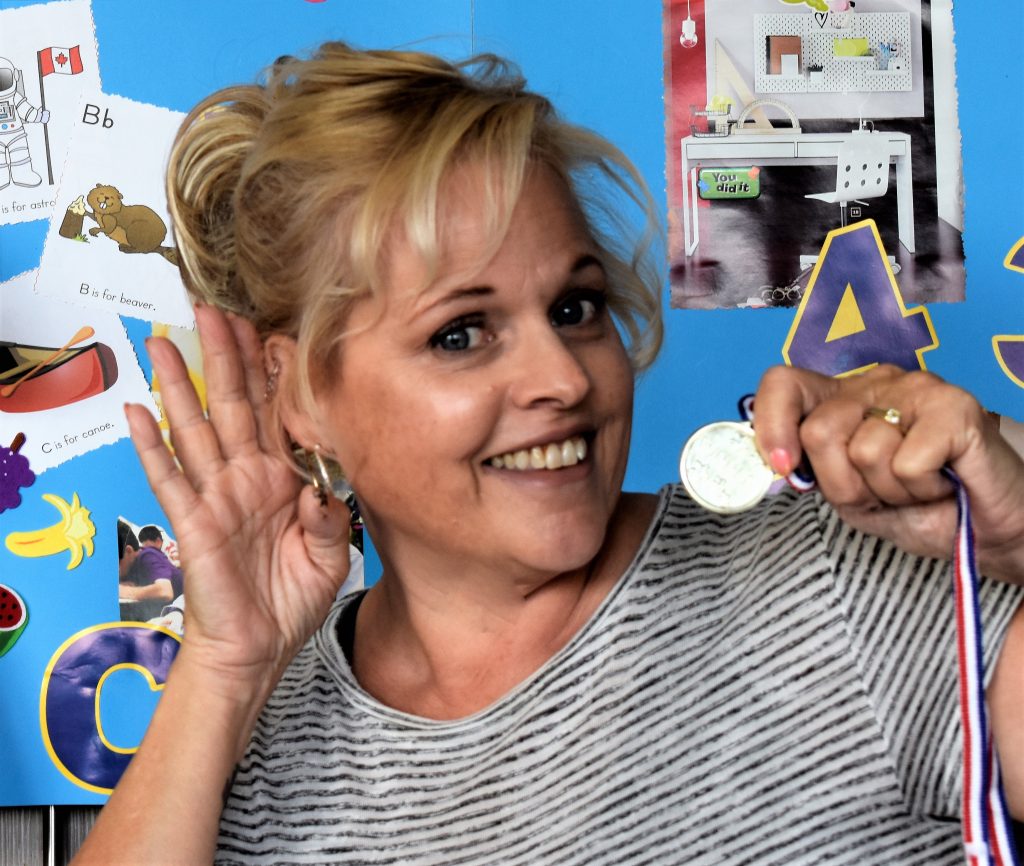 TPR uses actions alongside words so that children can associate the actions with the meaning of the words. As a tip, keep a number of “TPR friendly” songs ready on your computer. There will be many opportunities to use them and young children love a break from the lesson content to sing and act-out a related song.

Learn more teaching strategies in this article: How to Keep Your Online Students Motivated When Teaching ESL.

After backpacking Australia on a Working Holiday visa, Bridge graduate Johanna traveled to Japan for a year to teach English. She then moved to New Zealand for another two years before returning to her chosen home country, Japan, where she currently lives. Now, with more than eight years of professional English teaching experience, Johanna enjoys her expat life in Japan teaching teenagers at a private junior and senior high school, where she recently received tenure after only two years. When she’s not teaching, Johanna continues to travel regionally and explore new places.