The first day of English class is crucial for setting the tone for the whole term, so it’s important to start with a bang. ESL icebreakers are a great way to accomplish this, as they get students moving, build confidence, and set the tone for class. However, icebreakers aren’t just for day one! Throughout the term, English students might be coming to class tired after a long day or groggy and sleepy-eyed, so you want to get them engaged and energetic, and it might take a little creative ice-breaking to do that! There are tons of ESL icebreakers out there, and we’ll share details on how to effectively use the following 10 in your class.


What are ESL Icebreakers and why should I use them in class?

First, let’s talk about how icebreakers are beneficial in many classroom situations.


What makes a good ESL icebreaker?

A good ESL icebreaker is, first and foremost, fun, meaning that it should appeal to your students. One of the main ideas behind icebreakers is to get students out of their shells and make them more comfortable with speaking in class, so you’ll need to use an icebreaker that interests them.

Make sure that the icebreaker you choose is level-appropriate and that while pushing students to share more, you don’t go overboard and make them uncomfortable by asking them to share too much or things that are too personal.

Additionally, ESL icebreakers that only have a few rules are typically easier to explain to English learners and ensure that you spend less time going over instructions and more time actually conducting the activity.

Finally, a really good icebreaker doesn’t require too much preparation and additional materials but rather focuses on oral participation and fun.

No time for prep? Need to fill time? Check out our Last Minute Lifesaver activities.

What are the best ESL icebreakers?

Each of the following ice breakers requires little to no preparation, is easy to explain, and can be adapted to all levels and ages. These activities promote student talk time and encourage students to become more comfortable with speaking up in class.

In this game, students think about two scenarios and choose the one they would rather do. The “Would you rather…?” questions (a variety of which can be found online), can range from goofy to serious, such as:


You can play this as a whole class or put students in groups and give them a stack of cards with questions and they take turns asking each other the questions. Either way, following up by asking “Why or why not?” can lead to some fun discussions.

This can be a good ESL icebreaker for the very first class or as a warm-up later on.

One student thinks of three statements about herself that she will share with the class. Two are true and one is a lie. For example, the student may say something like, “I have five dogs, I’ve lived in three countries, and I’m a ballet dancer.” Then, the other students must guess which statement is a lie and if they can, explain why they think so. At the end, the student will reveal whether the others guessed correctly or incorrectly.

If used on the first day, the teacher can start by demonstrating the game as a good getting-to-know-the-teacher activity!

Write a discussion topic on the board (for example, food, pets, social media, or dating) and then start passing a ball or “hot potato” from student to student. As students pass the hot potato around, they must stop when they hear you say the words positive, negative or crazy.

When you say, “positive,” the student holding the potato must stop and make a positive statement about the topic. For example, If the topic is food, their statement might be “My favorite restaurant is Ichiban Sushi.”

If you say, “negative,” they must make a negative statement about the topic, e.g. “I’ve never eaten Chinese food!”

And, if you say, “crazy,” the sentence they create can be anything they like, such as “One time I ate a whole pizza myself!”

In this creative game, first think of several half-sentences and write each one on the top of its own piece of paper. The half-sentences should be written so that students can easily finish them to start a story, such as:


Alternatively, put these examples on the board and then have students each think of a half-sentence and write it on a piece of paper. Then, collect the papers and mix them up.

Students will then work in groups (or you can do this as a whole class). A group is given a paper with a half-sentence at the top and the first person in the group must read the half-sentence out loud, then finish it with whatever they like to continue the story (they will write it down and say it aloud). Next, the student passes the paper to his or her right and writes another sentence to continue the story.

When everyone has had a chance to contribute to the story, a representative of each group can read the completed story to the class. Not only can the stories be very funny, but this icebreaker gets students used to being more spontaneous with English.

This ESL icebreaker is a fun vocabulary guessing game. 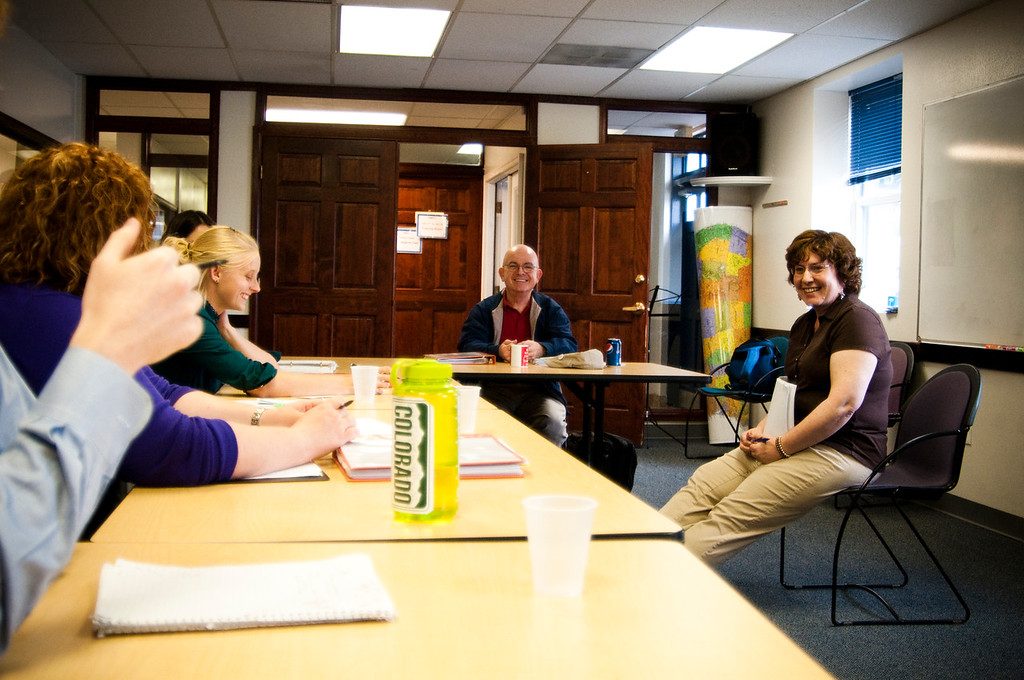 Put a chair at the front of the room with its back facing the board; this is the Hot Seat and a student volunteer must sit here. Then, write a word on the board (for beginners, tell them the category or theme of words, such as jobs or food – ideally vocabulary they are already studying). Then, the other students try to prompt the hot-seater into guessing what the word is by describing it without saying the actual word (fun with famous people too!).

For example, if you’ve told your beginner class the category is fruit and the word on the board is pineapple, the students can say things like:


With guessing games like this one, students are really enthusiastic about trying to get their peers to guess correctly and win the game. The desire to guess takes over, and formerly reserved students forget that they were ever afraid to speak up in English.

Have students each write down an open-ended question on a piece of paper. The questions could be something like “What is your favorite holiday?” or “What kind of movies do you like?”

Students then either fold their papers or crumple them up into balls and drop them in a box as you pass it around. Then, go around the room and have students take turns drawing a paper from the box and answering the question. (Just be sure that students answer questions from their classmates, returning their own papers if they accidentally draw them.)

You can easily tweak this activity for smaller classrooms with fewer students by having them each write three questions that have to be answered. You can also impose a speaking time limit, so students know how long they need to talk.

This is a very simple ESL icebreaker that works well for any age and is a great way to practice English numbers.

However, you can make this game as complex as you want, such as choosing to insert “beep” for odd or even numbers, on numbers divisible by three, etc. You could also bring it to the next level by creating other sounds or words they have to say for certain numbers. For example, every number divisible by three must be replaced by “beep,” and every odd number must be replaced by “boop.” For numbers that fall into both categories, you must say both (“beep boop”).

Be creative and establish the rules based on your students’ level.

Need another creative TEFL activity? Use Emojis to Teach English.

This is an easy one to incorporate on the first day of class (or later on if you feel students could get to know one another better). A benefit of this activity is that it removes the pressure of students introducing themselves at the start of class, which can sometimes cause stress for new students.

Simply break students into pairs and have them interview one another. To help students get started, give them a list of things to find out about their partner, such as where they’re from, how many siblings they have, or what their summer plans are for the upcoming year. Then, they will introduce their partners to the rest of the class.

This ESL activity, based on the game of the same name, works well for older and more advanced students.

Introduce a strange word that you’re sure they’ve never heard before (ask them to be sure that no one knows it, and make sure nobody looks it up!). Have each student write down a definition that they believe fits the word.

For teaching young learners, you could use this same idea to teach new, level-appropriate vocabulary or even to review past words that you’ve taught them.

This activity gets students up and moving around and asking their classmates questions. 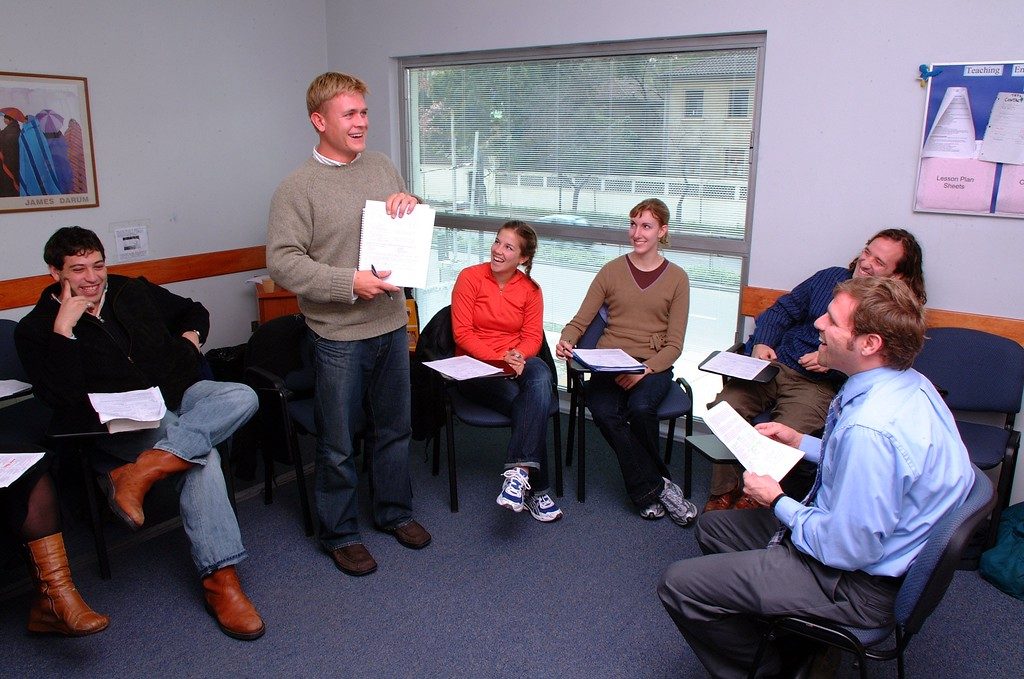 Create a list of traits, such as someone who has a birthday in July, someone who owns a cat, someone who has traveled abroad, etc. Then, have the students mingle with one another to find someone who fits each category. They can write down the names of their classmates next to each one to keep track of who fits which trait.

If you add the rule that they can only use someone’s name for one category/trait, it will ensure that they get to speak with each of their classmates instead of simply talking to the one person who meets all the requirements.

ESL Icebreakers: An all-around win for the TEFL classroom

ESL icebreakers are a great way to boost students’ energy, get them excited about the class, and build an atmosphere that makes them feel comfortable. While there are tons of icebreakers out there, the best ones are fun and engaging, promote speaking in English, and foster confidence.

Get more inspiration for a fun and engaging TEFL classroom: ESL Games & Activities for Kids.