< Back to the TEFL News

In Jordan, even the air smelled different.  For the first week there, I was reminded every time I took a breath, just how foreign this place was to me. It smelled like heavy spices, flavored tobacco, and jasmine blossoms. The city sounded different – the call to prayer echoed across the city from hundreds of mosques five times a day and everyone conversed in a language I could only barely understand. People were different! Men who completely ignored me were actually polite and respectful, while chatty and friendly men, I was advised to avoid. I was different. I was the clear outsider. It was evident everywhere I went. People stared; shopkeepers cheerily greeted me with “Welcome to Jordan!” The more I tried to hammer myself into the local culture, the more I became aware that I just didn’t fit in.

My blonde hair was out of place, so I covered it. “Are you Muslim?” locals would ask. Nope, I’m not. Another swing and a miss.

When I first decided to study abroad I was determined that I would be the champion of international travel. I had always been fascinated with other cultures and this program was a dream-come-true. Well, imagine my dismay when I was smacked with a big ol’ case of culture shock.

People usually describe the phases of culture shock as Honeymoon, Frustration, Adjustment, and Mastery. This can be summed up as:

3. I’m kind of getting the hang of living here.

4. My life is totally normal.

Since this is such a personal experience, these “phases” can vary a lot. You don’t always get all of them and they manifest in diverse ways. Some people get hostile and irritable; others become obsessed with cleanliness. I got really reclusive for about two weeks. I went straight from school to my room and read paperback action thrillers alone.

Luckily, I entered the adjustment phase very quickly. Just like culture shock itself has many different “symptoms,” it also has many different “cures.” Mine took the very specific entity of burgers and beer. On a side street near Amman’s First Circle, is a delightful, dimly lit hangout called Amigo Pub. Its patrons are primarily westerners searching for a cheap drink in a country where alcohol is taxed at a painful rate. Here, I wasn’t the odd man out. I wasn’t on any sort of display or scrutiny. I could talk to western men without it meaning much. I was just another face in the crowd enjoying a meal.

This made the times that I stuck out affect me less. So, the shopkeeper knew immediately I wasn’t a local. Being a novelty doesn’t have to be a drag. When they gave me their prices in English, I would click my tongue and say, “Kateer ghali.” Too expensive. They would laugh in surprise and, suddenly, I’d be having a real conversation.

I was still different – I wasn’t fooling anybody – but I was even more different than before. I wasn’t just a foreigner; I was a foreigner who knew what she was doing. Keeping this in mind, interacting with locals was easy and fun. Arabic culture is basically Southern Hospitality on steroids. You can’t have a conversation with Jordanian without leaving with their phone number and an invitation to stay at their house if you ever need it. I made friends, got up to my ears in modern and traditional culture, and explored the city constantly. All of it was thanks to a bit of a balancing act I would do at Amigo Pub. 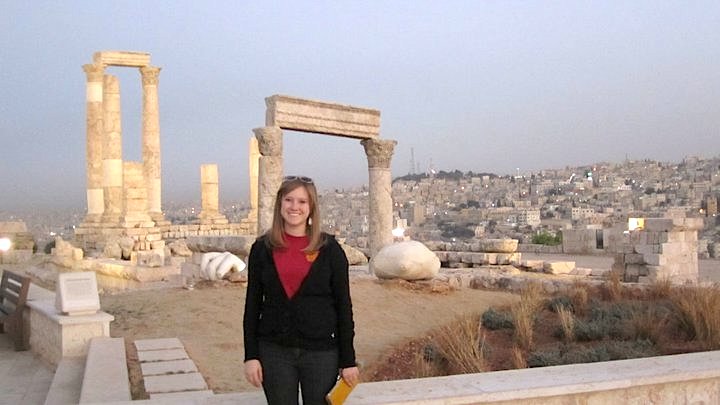 It was in that place where I realized that full integration wasn’t my game.

I wasn’t going to ever be able to “go native” in Jordan. There were too many things I liked about my own culture – and that was okay! Going abroad doesn’t wipe the slate clean and start you at square one; it adds to who you are.

I still got to the “my life is totally normal” phase; it just included burgers, beer, and talking to boys.